Legionella: Prevention and sanitation of bacterial contamination in water systems

Since the 1980s, Tecnoambiente has been dedicated to the study of preventing and sanitising bacterial contamination in water circuits.

Through its long experience in the field, it has developed a very simple anti-legionella treatment system capable of restoring contaminated systems and preventing their further contamination.

The system, called TAPRESIL, can be used on all installations in hot or cold water circuits, on drinking water circuits, in storage tanks and in air conditioning systems.
The technology enables systems to be sanitised using the proportional dosage of TABIOSIL, an ecological solution based on active oxygen and oligodynamic ions.

The product is able to sanitise circuits contaminated by biofilm, bacteria and biological formations because it causes the cell membranes to degrade and destroys the core.

In fact, circuit and tank contamination by biofilm is facilitated by the presence of lime scale and corrosion, as well as stagnant water and particularly damp areas.

Unfortunately sanitising alone is not enough, further contamination due to the presence of bacilli that can be found increasingly in groundwater and that are resistant to chlorine which is commonly used for water disinfection must be prevented .

Legionnaire’s disease is an infection caused by a type of mobile, asporogenous gram negative bacilli for the presence of flagella, belonging to the Legionellaceae family, the most dangerous to humans in serum group one is known as Legionella pneumophila. Its natural environment is related to the presence of water and thus, as this element is basic to human life, it is present in communal environments (water distribution systems, storage water heaters, heating systems, air conditioning circuits, swimming pools, thermal baths and spas), the spores are easily transported and can thus cause widespread contamination.

People contract the infection by aerosol, in other words when inhaling small droplets (1-5 microns) of water contaminated by a sufficient amount of bacteria; when the bacteria comes into contact with the lungs of those at risk, Legionnaire’s disease occurs, in the past it was often mistaken for pneumonia. It has never been shown to be transmitted contagiously.

Infection with Legionella can give rise to two distinct clinical conditions: Pontiac fever and Legionnaire’s disease. Pontiac fever, has an incubation period of 24-48 hours and resolves in 2-5 days. It is accompanied by general malaise and headache followed by fever. Legionaries disease has an average incubation period of 5-6 days and is much more serious: in addition to discomfort, headaches and coughing, gastrointestinal, cardiac and neurological symptoms may also be present along with various complications; in the most serious cases it can even be fatal.

Pneumonia caused by legionella is no different from other forms of atypical or bacterial pneumonia, but it is recognisable by the modes of involvement of extra-pulmonary organs. The main risk factors that facilitate a person contracting Legionnaires disease include advanced age, smoking, immunodeficiency, male gender and chronic degenerative diseases.

A few hundred cases of Legionnaires’ disease are recorded in Italy each year, but it is believed that this number is actually an underestimate, because sometimes the disease is not diagnosed. The disease is fatal in 5-15% of cases.
In 2012, a total of 1,350 cases of Legionnaires’ disease were reported to the ISS (National Institute of Health), an increase of 33% compared to cases reported in 2011. 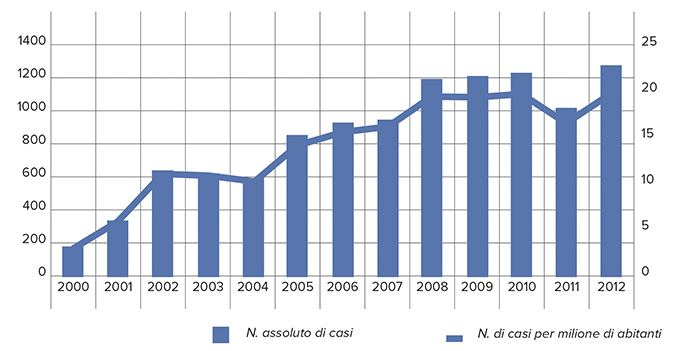 The diagram above shows the number of cases and the rate of incidence of Legionnaires’ disease from 2000-2012. Of the 1,350 reported cases, 72 (5.3%) were admitted to the hospital or clinic, 137 cases (10.1%) had spent at least one night in a place other than their usual house (hotels, camping sites, ships, private homes) , 42 cases (3.1%) were residents in gated communities, 22 cases (1.6%) had other risk factors. The urinary antigen test was confirmed as the most widely used diagnostic tool (96%). In 100% of cases the causative agent of the disease was Legionella Pneumophila.